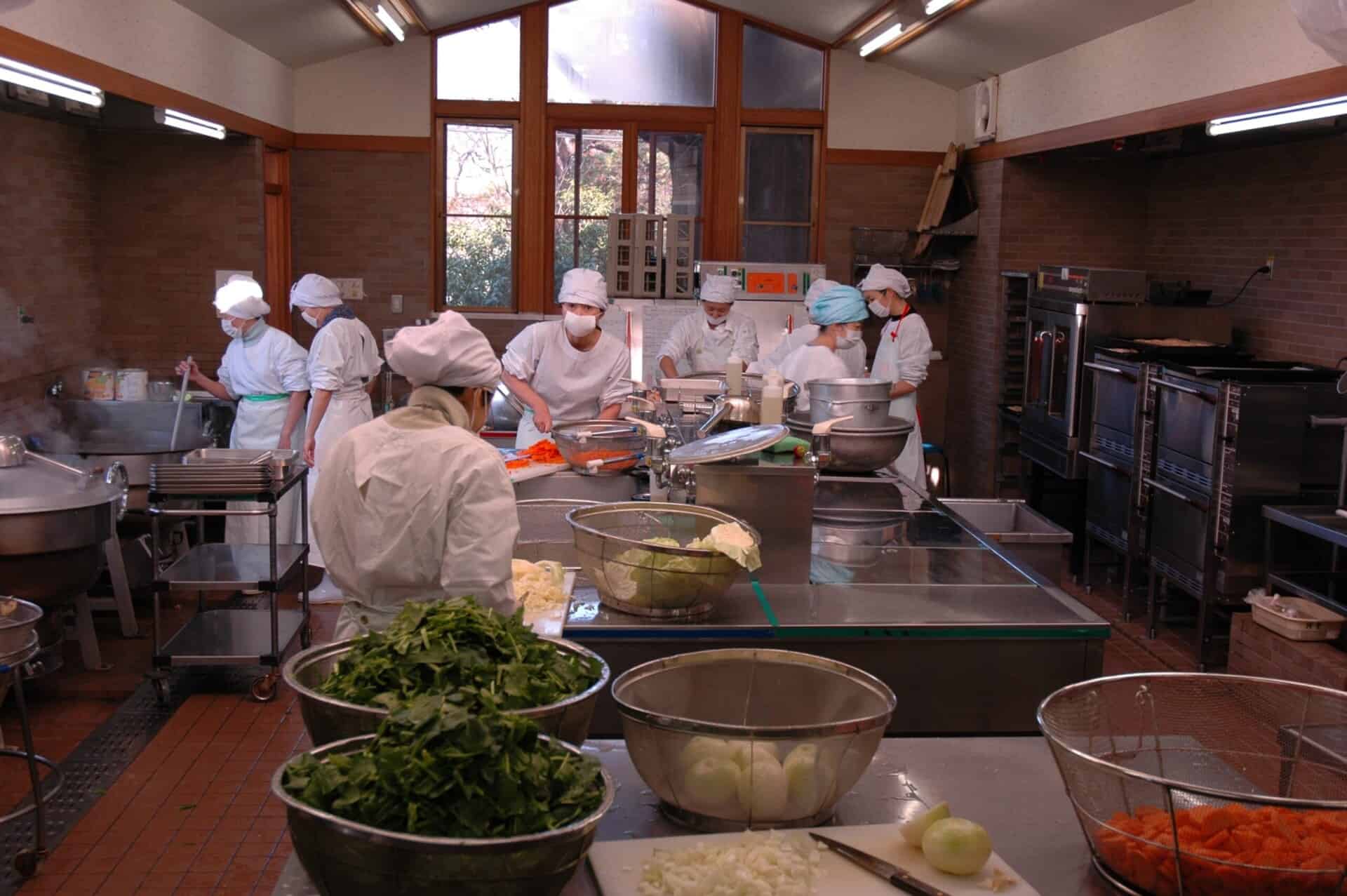 Jiyu Gakuen Interview No.3 “Cooking Brings Up the Affection of Parents for their Children. What is ‘Food Education’ at Jiyu Gakuen?” 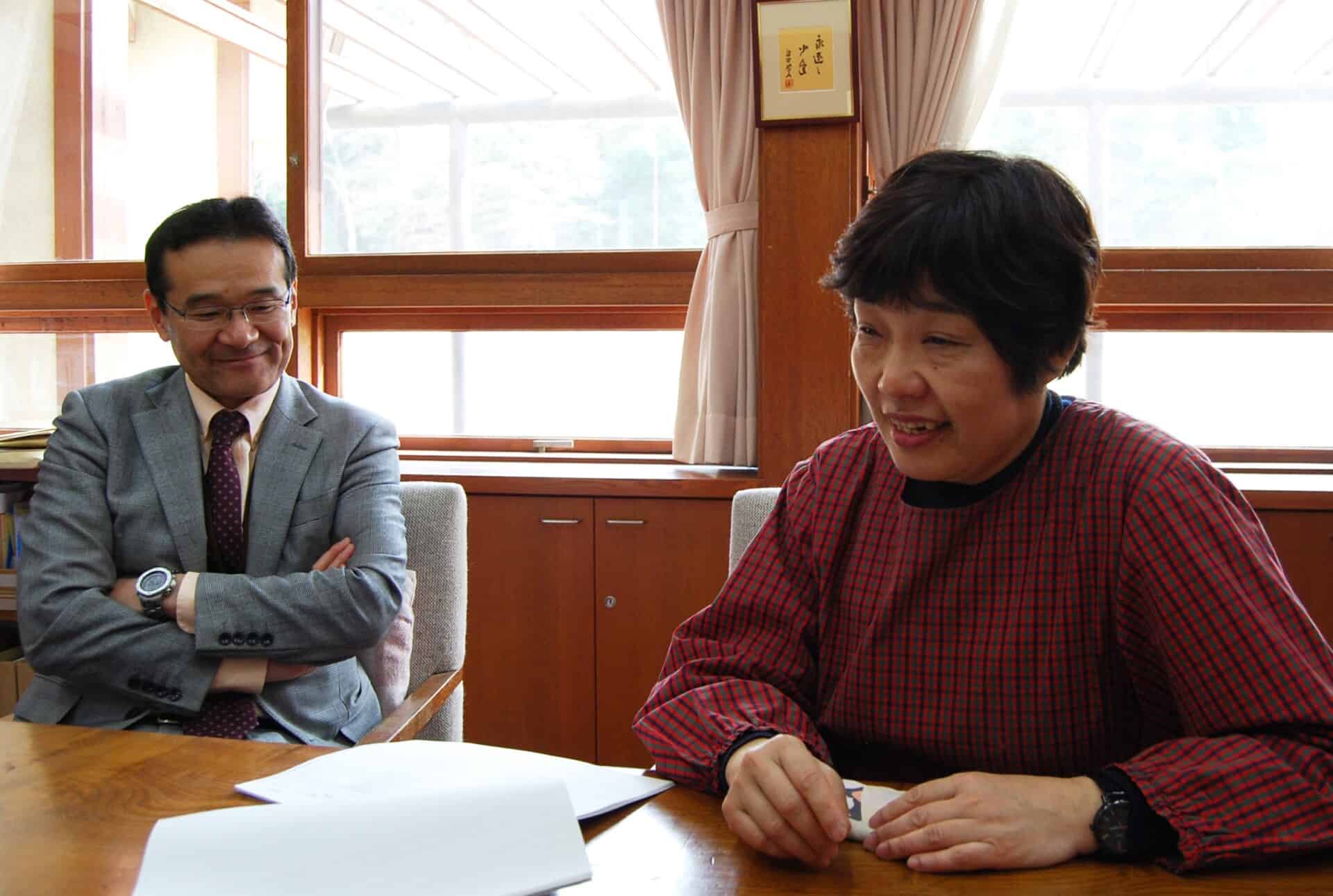 Q: You say your parents at Shotoubu cook lunch for some 200 children and staff. What kind of system do you have to prepare so many meals?

A: (Ishikawa) The number of fathers and mothers who both work full-time has been increasing, so we have arranged a system where they take the duty once in two months whereas before when I was on duty as a parent, we did it once a month.

We could not do the same thing as the time when most of the mothers were full-time housewives, so the staff of the Food Office came to do some work such as preparing the kitchen, which had been done by parents before.

Q: Are the menus planned by the Food Office?

A: (Ishikawa) We have a ‘menu meeting’ to plan the menu with parents, staff at the Food Office and the teachers together. Parents may use the menu which the parents of the previous year planned. Our menus are reliable as parents wish them to be good for their children and, moreover, the dietician of the Food Office keeps the balance of nutrition. But you can change whatever you would like to change. For example, we adopted a proposal of parents at the menu meeting, when they wanted to have more soybeans included in the menu. We respect the feelings of the parents at the time.

Q: How often do you hold the menu meeting?

A: (Ishikawa) We would have it once a month until last year, but here too, to reduce the parents’ work load, we now have it once or twice a term. 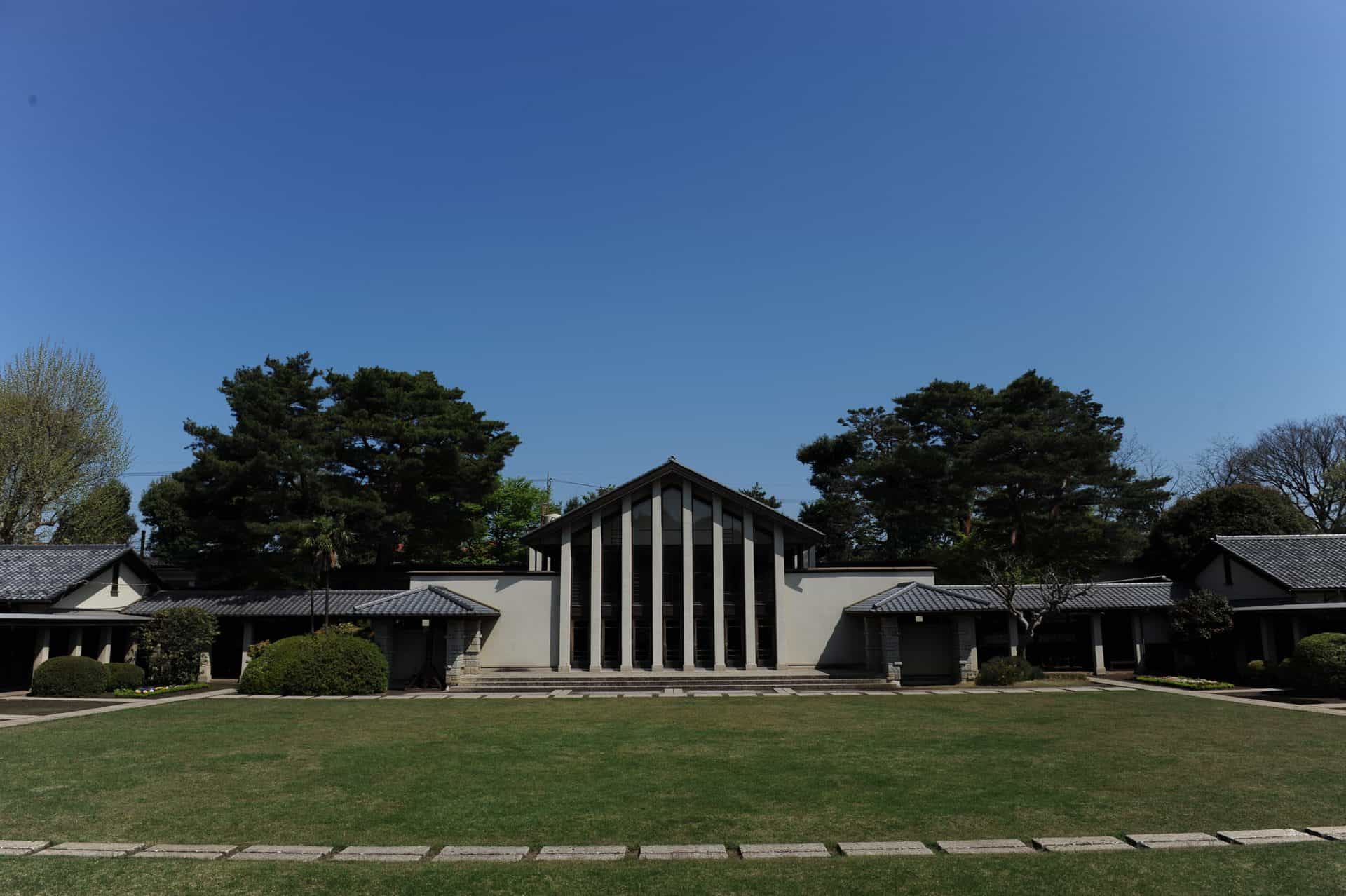 The dining hall at the Girls’ Department

Q: Is the work, from preparing to finishing the cooking, done under the guidance of the Food Office staff?

A: (Ishikawa) The menu may not be a new one, but it might have been cooked many times in the past. And the parents on duty never fail to leave a record. So by reading that record, you know that it may be very hard with this menu with this number of people on duty, or that it might have been hard as there were not a few new parents in the group, as the difficulty depends on not only the menu, but the members of the cooking group. They follow the way which has been taken, checking the past records.

Q: You have the know-how accumulated for the past 100 years with the history of Jiyu Gakuen.

A: (Ishikawa) Moreover as the staff for kitchen hygiene at the Food Office observes their cooking every day, she gives advice to parents, exchanging opinions with them.

Q: Let us ask about the economic aspect of the cooking. How much does it cost for one meal?

A: (Ishikawa) It is the Food Office who makes the budget and takes charge of the cost for meals. Speaking of Shotoubu, the cost for personnel is not so much and the ratio of food supplies is higher than those departments where we hire some cooks, so it is about 50% at Shotoubu.

The expense for meals at Shotoubu is 7,480 yen a month, which puts the balance barely in the black. From time to time, it goes into the red, but it is an amount that we can get out of it by our effort. Settling the accounts, we say to the parents that we would like to use cheaper potatoes as we will come to have a deficit if we keep on going as planned, or when the prices of some vegetables jump up in the market, we talk with the parents about using other vegetables.

Q: Do you follow the guidelines laid down by the Ministry of Health, Labour and Welfare to the calculation and amount of nutrition?

A: (Ishikawa) Yes, they have laid down the guidelines, telling us to make the menu within the certain limits according to the growth of children, so we follow them correspondingly with some modification; for example, in the Boys’ Dept. we add more protein and calories for the boys as they have more physical exercise.

In Shotoubu, we think of the balance in the menu, and if we find a lack of soybeans or calcium, we advise parents to take in more soybean products or small fish.

Q: From your story, it seems to us that while you follow the guidelines of the Ministry, you always look to do the best cooking for children with cooperation of parents and the Food Office, which I think is an extended version of home cooking.

However there is sometimes a slight difference in what they think is good individually among the parents, and then we tell them that we would stand neutral, paying respect to the difference. If there was someone who would insist, we would listen to her, and decide what to do after our discussion as the Food Office. 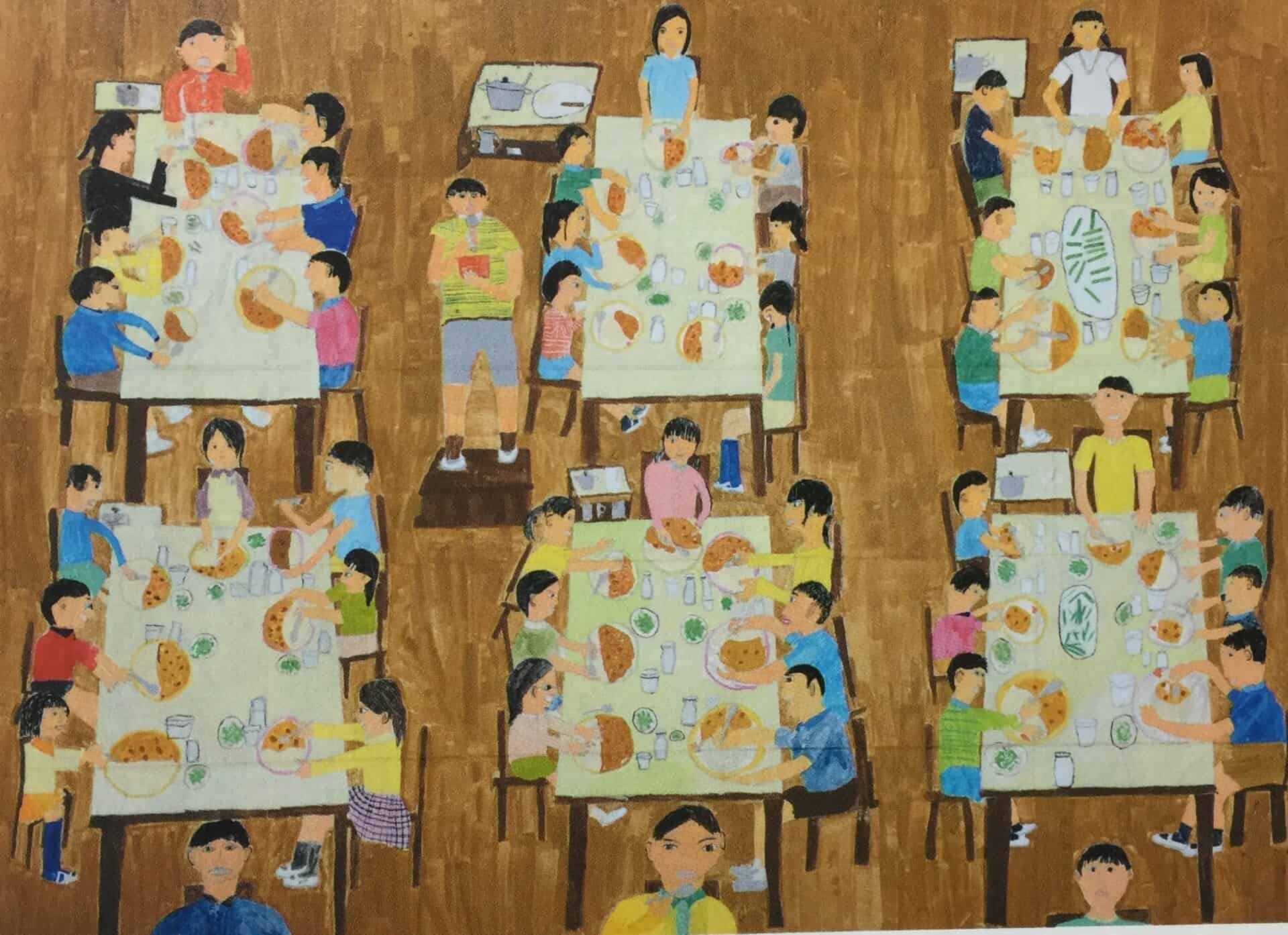 Scene of the dining hall drawn by the pupils of Shotoubu

Q: I think Jiyu Gakuen becomes a place where the mothers, who do not cook so much at home, learn a lot, but at the same time you can have some mothers who voice their complaints or discontent, can’t you?

A: (Ishikawa) I would think there must be some mothers who would have liked to send their children to Jiyu Gakuen, but they cannot take up the cooking duty for various reasons. I don’t know if there is someone like that who doesn’t come to cook at all, as the management of the cooking duty is carried out by the Parents Committee.*

The Parents Committee: The committee consists of several members from each class. Concerning cooking, they carry out such work as making menus, grouping the parents to each day, etc.

The other day the parents of Shotoubu, the Boys’ and Girls’ Depts. together, gave a party for us at the end of the school year to express their gratitude. At the party I met a mother of a sixth grade pupil who had been a member of the Parents Committee. She told me that the past year had been really a very enjoyable one for her.

I knew that she had been in charge of the hard duty of grouping parents for cooking, so I said to her, “You must have had a hard time. Thank you very much.” And she replied to me as follows: “To tell you the truth, I didn’t like to cook at all. So I was wondering why I had to do such a thing like cooking at school.” But at the end she said to me, “I have enjoyed it to my heart’s content.”

At her words of, “Through working together with all of other parents and coming to school very often, I came to see what I had not been able to see,” I was almost moved to tears with thankfulness.

Q: It is wonderful that by experiencing practical matters, mothers learn and discover a lot, isn’t it?

A: (Ishikawa) There may be some who do so and there may be others who don’t. But as you get along with those who do so, you will gradually be influenced.

I do not know much about the details of Christianity, but the freedom that our founders talked about may be something like this. Looking at the bright face of the mother, of whom I have just spoken, I thought that this might be the freedom of Jiyu Gakuen. You may not perceive it if you are passive. 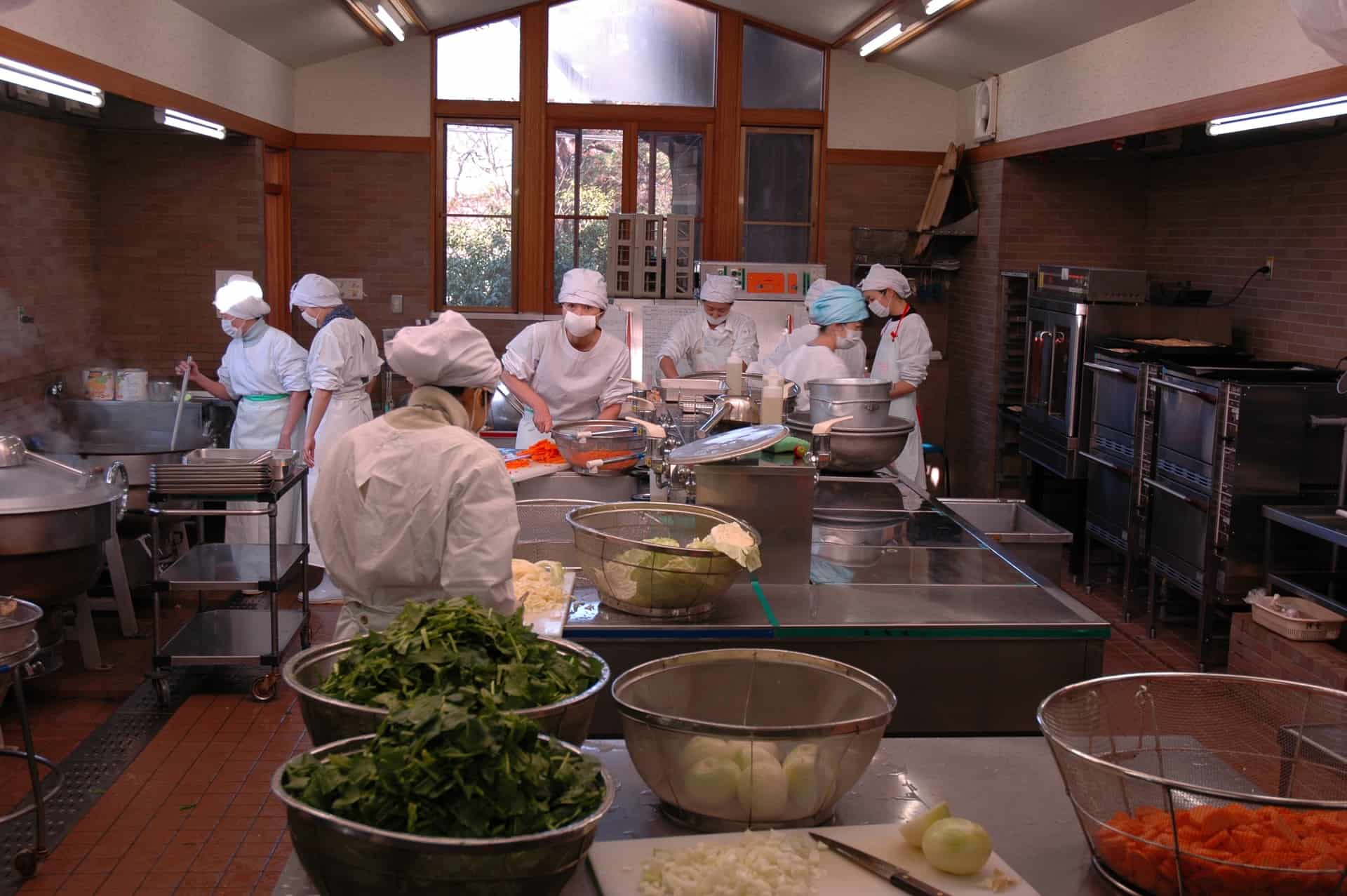 Q: Finally, please tell us how you grasp the Edible Education, ie. learning of eating, at Jiyu Gakuen.

A: (Takahashi) To eat is after all to be given life. We human beings cannot live without getting life. So how to live is revealed in how to eat. We wouldn’t like to eat rudely. We wouldn’t like to cook or wash dishes roughly. As human beings who cannot live without the given life, we would like to eat so that we foster the mind to give thanks for life.

One day (perhaps on the day before the Mother’s Day) at lunch time, our high school boys expressed their gratitude for the parents cooking saying, “We have grown by eating our mothers’ love. You, mothers, have worked very hard and cooked lunch for us every day with all your heart. By eating your lunch, we have been receiving your love.” At these words I felt the growth of mind and body of our children.

A: (Ishikawa) You cannot stop eating. Therefore it sometimes becomes troublesome, and difficult. But meals give you the basis of yourselves. When you think of how to live, you first have to think of how to eat. We learn a lot from that.

A: (Takahashi) Next time, please do come to Jiyu Gakuen for lunch which our students prepare with the vegetables they have grown.

How do you think of the interview we have reported to you in three parts? Education carried out daily at Jiyu Gakuen should not be special at all, but now we can take it to be very precious and invaluable. In modern society, we are losing the dining table scene, which Jiyu Gakuen regards as important, and the school teaches its children how to manage their lives. Above all, Jiyu Gakuen, a teaching institution, is passing the mind, which they cultivate in their students, as a new awareness to our society and to our homes. We cannot help but think highly of the reason for being of Jiyu Gakuen.
Next time we would certainly like to join the lunch prepared by the parents with the vegetables grown by the students, and tell you how the cooking is actually done and how they spend their lunch time. Please wait in expectation for our report. 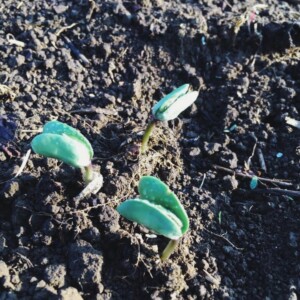 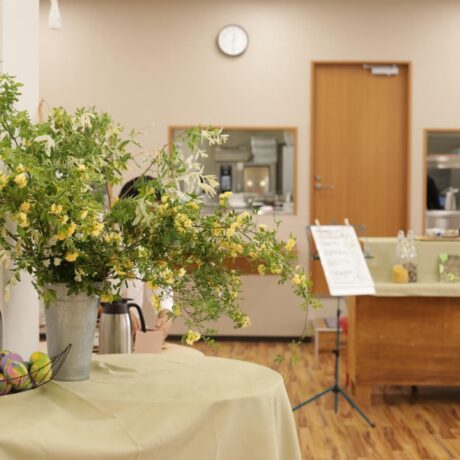 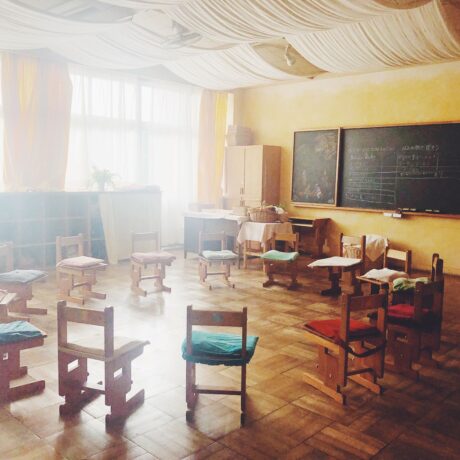 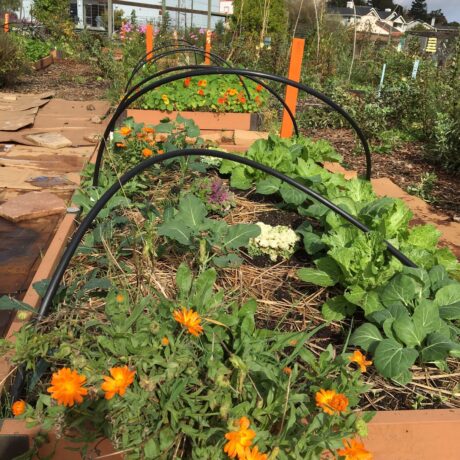 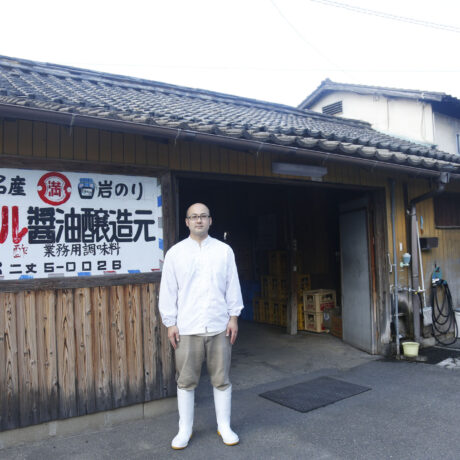 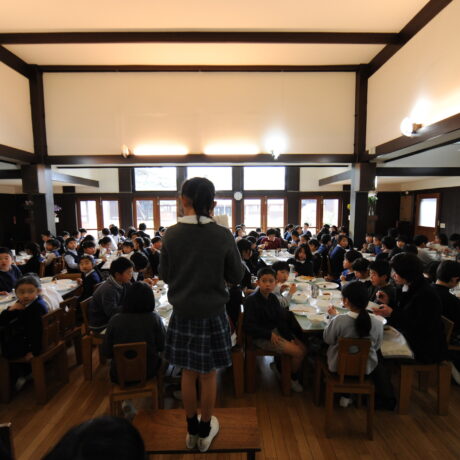